Transcranial ultrasonic brain therapy at frequencies higher than 500kHz requires adaptive focusing to compensate for the aberrations induced by the skull bone. This can be achieved by using multi-element arrays driven by a dedicated electronics. A growing number of elements was used to improve the focusing: 64 elements in 2000 [1], 300 in 2003 [2], 1024 in 2013 [3], and with more to come. We will present some of the salient results obtained pre-clinically and clinically with such multi-element transcranial devices. Nevertheless, we will show that comparable transcranial focusing can be achieved with a novel approach in rupture with the current trend. It consists in a single- element covered with a 3D acoustic lens of variable and controlled thickness. Similar lenses have been introduced in the past to perform single or multiple focusing patterns in homogenous propagating media [4] but recent 3d printing and milling capabilities make tailor-made 3D lenses a feasible option for transcranial adaptive focusing[5] and 3D beam shaping, allowing to create holograms in the brain. Such lenses can furthermore allow beam steering around the target by taking advantage of the transkull isoplanatic angle. 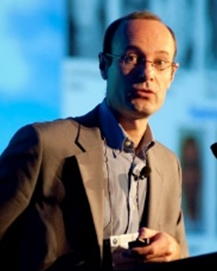 Jean Francois (Jeff) Aubry is a director of research at France’s National Center for Scientific Research (CNRS). He work at Physics for Medicine Paris (Paris, France) and is invited associate professor at the University of Virginia, department of radiation oncology.
His main research interests are MR-guided transcranial brain therapy, Ultrasound-guided transcostal liver therapy, but he also worked on ultrasonic motion detection and motion correction, high resolution cavitation mapping, and ultrasonic brain imaging. Aubry holds four patents on adaptive focusing and has been a consultant for Supersonic Imagine (Aix en Provence, France) on MR-guided brain therapy. He has given 54 invited talks at international conferences and published more than 75 papers in international scientific journals.
In 2011, he received the Frederic Lizzi Early Career Award from the International Society of Therapeutic Ultrasound and the 2011 CNRS bronze medal. Aubry is a member of the editorial board of the Journal of Therapeutic Ultrasound and associate editor of the journal IEEE UFFC. He is a member of the Focused Ultrasound Foundation’s Research Advisory Committee. He has been elected president of the International Society for Therapeutic Ultrasound (2015 – 2018).