Piezoelectric materials are interesting for wearables due to their relatively low-cost, compactness and flexibility. By far the most spread wearable application is quartz watch, which uses temperature-stable oscillation of the single-crystal piezoelectric material to keep the exact timing. However, large number of wearable applications exploit direct piezoelectric effect to either scavenge the energy or monitor motion of the human body and its health.
Piezoelectric sensors for wearables have been developed to follow pulse wave signals, movements of muscles, respiration, etc. In recent years, the field observed increased efforts to develop electronic-skin- and fiber/fabric-based applications, focusing on preparation of flexible piezoelectric structures at low temperatures. Among large amount of studied materials the most promising are ZnO-based nanostructures, poly(vinylidene fluoride)  (PVDF)-based polymers and Pb(Zr,Ti)O3 (PZT)-based nanostructures.
The need for self-powered health-monitor systems is the main driving force for development of wearable piezoelectric energy harvesters. Their development is not straightforward due to specifics of the human movement: low and irregular frequencies, large amplitudes and multi-axial motions.  Nevertheless, a number of applications has been demonstrated, including shoe-integrated and wrist-worn eccentric rotor-based harvesters. Their development rely on the preparation of high-quality piezoelectric materials, among which the most performant are thin-films of PZT, Sc-doped AlN and PVDF-based polymers. In the presentation, we will make an overview of the state-of-the-art sensing and harvesting applications and we will benchmark different materials. The focus will be on their functional properties and possibility to prepare flexible structures at low temperatures.
In the last part, we will focus on two of our recent activities. The first are flexible PZT piezoelectric thin films grown directly on austenitic steel metal foils via chemical solution deposition. Their dielectric permittivity is five-times smaller (200) and their piezoelectric coefficient d33,f is comparable (~150 pm/V) to the to the films grown on standard platinized silicon substrates, making them particularly interesting for wearable harvesting.1
The second example are multilayer structures of poly(vinylidene fluoride trifluoroethylene) (P(VDF-TrFE)) printed on poly(ethylene 2,6-naphthalate) (PEN). These flexible structures, with the area of 2.4 cm2, can harvest as much as 1 mW at 33 Hz and are able to feed a microcontroller with wireless connection to a mobile phone.2 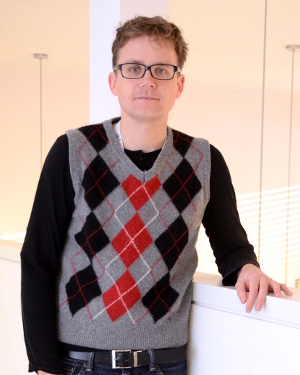 Sebastjan Glinsek received PhD from Jozef Stefan International Postgraduate School in Slovenia, followed by postdoctoral appointments at Brown University, USA, and CEA-Leti, France. Since 2017 he is a research and technology associate at Luxembourg Institute of Science and Technology.

His main field of expertise is processing of ferroelectric and piezoelectric materials through chemical methods. In recent years, he is focusing on direct patterning via inkjet printing and development of low-temperature processing techniques for haptics and energy harvesting. He is especially interested in bridging scientific discoveries with industrial applications.