Mario Kupnik
Details About the presentation

In air-coupled ultrasound applications, over distances in the meter range, frequencies ranging from 40 to 200 kHz are mostly used. This is due to the increasing damping at higher frequencies. The larger the distance to overcome, the larger the motivation to use frequencies close to 40 kHz, but also not lower than that in order to ensure enough safety margin to hearing capabilities of humans and animals. Similar as in medical imaging applications, only a phased array approach allows more sophisticated modalities in air-coupled applications as well. Examples are ultrasound imaging of entire rooms including human- and object detection, additional surround sensing functionality for vehicles and robots, various integral acoustic transit time measurement methods, or non-contact ultrasound via Lamb waves for non-destructive testing, to name a few. All these applications require efficient air-coupled transducers, combined in a grating-lobe reduced phased array configuration. The most prominent examples are piezoelectric actuated bending plate transducers for transmit and electrostatic transducers such as CMUTs or MEMS microphones for receive, since they all bring certain advantages at frequencies as low as 40 kHz. In order to realize such grating-lobe reduced arrays, several techniques are applicable and will be discussed for the aforementioned applications in this talk. Additive manufacturing, for example, simply allows separating the vibrating aperture from the acoustic aperture via tapered wave-guide channels, and, thus, an effective inter-element spacing reduced to a half wavelength can be achieved. 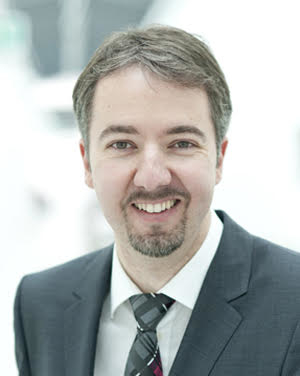 Mario Kupnik received the Diplom Ingenieur degree in electrical engineering from Graz University of Technology, Austria, in 2000, and the Ph.D. degree from University of Leoben, Austria, in 2004, all in electrical engineering. From 2005-2011 he was working as a Postdoctoral Researcher, Research Associate and Senior Research Scientist in the group from Prof. Khuri-Yakub at the Edward L. Ginzton Laboratory, Stanford University, USA. Before his Ph.D. studies (2000-2004), he has been with Infineon Technologies AG, Graz, Austria, working as an Analog Design Engineer in the field of ferroelectric memories and contactless smart card systems (RFID). From March 2011 to December 2014 he has been a Full Professor of Electrical Engineering at Brandenburg University of Technology, Cottbus, Germany. Since January 2015, he is a Full Professor at Technische Universität Darmstadt, Germany, heading the Measurement and Sensor Technology Group. His research interests are on low frequency phased arrays for air-coupled ultrasound, ultrasonic gas flow meters, modelling sound propagation in harsh environment conditions, micromachined air-coupled ultrasonic transducers, soft materials for energy harvesting, acoustic levitation and tweezing in air, biological/chemical sensing in liquids, modelling and fabricating capacitive micromachined ultrasonics transducers (CMUTs) and applying these devices for various sensory applications.